The Question I always get is “Does it work”?

Well the short answer is yes. I myself had searched for a stomp pad online and in stores that would not only work but look good on my board. Although I wanted functionality, I must confess I was really only concerned about how it matched my board. I had a really cool Ride board with bitchin graphics. I hated the fact I had to cover up part of the better area of the board with something that didn’t even go ascetically. With this being said, I just bought something that I liked not because of functionality. It was my second year of boarding and exiting the lift was still sketchy. I could do it but if anyone was in my way i was in a bit of trouble. One day, I was exiting the lift and someone had fallen in the landing area. As I tried to avoid them, my boot slipped off the pad I was using and bam….I was on my ass with a broken wrist in two places. The pad I was using actually iced over and became worse than having nothing at all. So next came me shopping for something that worked. So I looked and looked and asked around and everyone said the same thing……”nothing works” or at least “nothing works great.”  Not to bore you with the evolution, the spike height and shape were finally settled on after years of testing, as were the anchoring and base materials. With the unique shape of spikes, the ice build up actually breaks off the pad rather than collect and ice up. No more slippery pads and no more kicking the hell out of it to try and chip it away. The spacing was also tricky as to get it just right so when you stand on the pad the spikes can find the grooves in the tread pattern of your boots. I also wanted to make it cool and go with any graphics that are on the board. So I came up with different designs, colors and finishes.

So the question again, “Does it work”?

Yes, it works….It is the most functional pad out there by far. It also has some pretty rad designs. The construction is all metal, aluminum and stainless steel. Its built to last and to help you have control, regardless if you are a beginner just learning to get off the lift chairs, or an expert trying to avoid those fallen as they are exiting the lift chairs.

All of us snowboarders have one thing in common. We can do something that is extremely difficult that most people can’t do. It’s the very thing that binds all boarders together. By bringing the Spike Pad into the market place i just wanted to make snowboarding better! 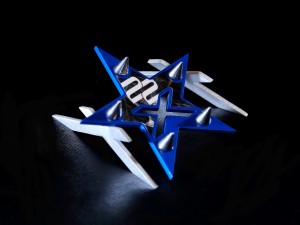 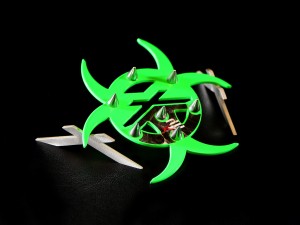 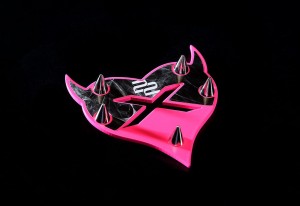