X22 Snowboarding, who are the makers of the X22 Stomp Pad, are highlighting the top snowboarding destinations in the world. Summit County, Colorado is home to Copper Mountain, a ski and snowboard resort located in the White River National Forest. Copper Mountain has a summit elevation of 12,313ft. and 2,465 acres of boardable terrain. It is one of the largest ski and snowboard resorts in Colorado. Copper Mountain is located 75 miles west of Denver, and is operated by Powdr Corporation, one of the largest resort operators in North America.

There are 23 lifts which feed over 140 trails. There is a good balance of easy, intermediate, advanced, and expert terrain. There are several terrain parks and two halfpipes, including a 22-foot superpipe. Copper Mountain receives an average of just over three hundred inches of snowfall annually, with over 330 acres of snowmaking capacity.

Copper Mountain is renowned for its excellent lodging and apres ski entertainment, which is encompassed in three villages: Center Village, East Village, and West Village. Copper Mountain was also featured in pop culture in 1994 as the ski scenes from the classic movie Dumb and Dumber were filmed in Copper. With its well-run facilities, abundance of dry powder, and perfectly groomed pistes, Copper Mountain is an excellent snowboarding destination.

When you buy your snowboarding equipment this season, don’t forget to get a stomp pad. Nobody makes better stomp pads than X22 Snowboarding. Go to X22snowboarding.com to see the newest innovation to the stomp pad: The X22 Spike Pad. These amazing all-metal stomp pads are equipped with 1/2 inch(13mm) silver-coated stainless steel spikes which provide an unprecedented level of control and stability when getting off of the chairlift. They come in several rad designs and finishes and look awesome on any snowboard. You have never seen or used a stomp pad like this before. Go to X22snowboarding.com to get your new stomp pad. 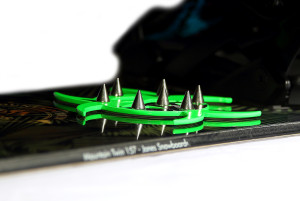